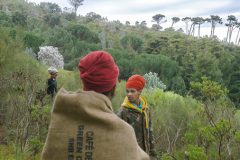 The Crown Against Mafavuke is based on a South African trial from 1940. Mafavuke Ngcobo was a traditional herbalist who was accused by the local white medical establishment of ‘untraditional behaviour’. The film explores the ideological and commercial confrontation between two different yet intertwining medicinal traditions and their uses of plants, with slippages across gender and race further questioning notions of purity and origination. The re-imagined court case is filmed at the Palace of Justice in Pretoria, where the Rivonia trial was held that sent Mandela and his fellow accused to Robben Island prison.

Muthi follows enduring herbal practices at rural and urban sites in Johannesburg, the Western Cape and Kwazulu- Natal, showing chains of value and practice which include plant collectors, traders, traditional healers, local communities and users. Together these touch on larger issues around erasure and continuity, tradition and modernity, indigenous knowledge and alternative medicine in post-colonial contexts.

Uriel Orlow’s practice is research-based, process-oriented and multi-disciplinary including film, photography, drawing and sound. He is known for single screen film works, lecture performances and modular, multi-media installations that focus on specific locations and micro-histories and bring different image-regimes and narrative modes into correspondence. His work is concerned with spatial manifestations of memory, blind spots of representation and forms of haunting.