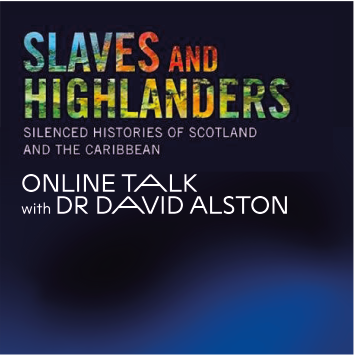 Join us for an online conversation with David Alston on his new book and its Sutherland connections.

David Alston
Born and brought up in the Highlands – mainly in Sutherland – David Alston is a freelance historian and author who has been a youth worker in Toxteth (Liverpool), a schoolteacher in Wallsend (Tyneside), and (back in the Highlands) an adult education organiser, a museum curator, a local authority councillor, and chair of the NHS Highland Board. For 20 years he has been researching the role of northern Scots in the slave-worked plantations of the Caribbean, especially Guyana. He is among the first Scottish historians to address the issue of Scotland’s involvement with slavery.

Slaves and Highlanders
Scots were involved in every stage of the slave trade: from captaining slaving ships to auctioning captured Africans in the colonies and hunting down those who escaped from bondage. This book focuses on the Scottish Highlanders who engaged in or benefited from these crimes against humanity in the Caribbean Islands and Guyana, some reluctantly but many with enthusiasm and without remorse. Their voices are clearly heard in the archives, while in the same sources their victims’ stories are silenced – reduced to numbers and listed as property.

David Alston gives voice not only to these Scots but to enslaved Africans and their descendants – to those who reclaimed their freedom, to free women of colour, to the Black Caribs of St Vincent, to house servants, and to children of mixed race who found themselves in the increasingly racist society of Britain in the mid-1800s.

As Scots recover and grapple with their past, this vital history lays bare the enormous wealth generated in the Highlands by slavery and emancipation compensation schemes. This legacy, entwined with so many of our contemporary institutions, must be reckoned with.

A landmark book on the links between slavery and the north of Scotland.

I think it is a superb book.

In profound parts, as painful as it is plaintive, Dr Alston’s dedicated work offers powerful glimpses of the victims and perpetrators of widespread abuses, the bloody terror and casual horror of everyday estate life and the brutally suppressed revolts.

David Alston’s Slaves and Highlanders is necessary reading for our moment, with the racial reckoning in global headlines resting on an honest reckoning with history. Alston illuminates the Scottish role in slavery, the slave trade and empire in the Caribbean with a moral commitment to the ‘half glimpsed figures’ at its margins. This is microhistory at its best, for it conscientiously excavates individual lives in the Highlands to reveal how those lives were intimately connected to the fates of forgotten others in the colonized world. Alston’s ethics in telling the full truth is matched by a prose style that is evocative and lucid, with an excellent eye for humanizing detail.