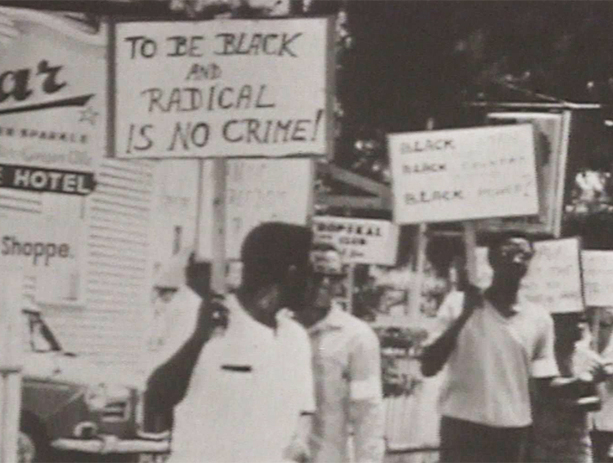 “This is the dark time, my love,
It is the season of oppression, dark metal, and tears.
It is the festival of guns, the carnival of misery.”
—Martin Carter, 1953

The Terror and The Time is a documentary about colonialism in British Guiana during the 1950s. The film’s narration is a series of poems from Martin Carter’s Poems of Resistance, written and published in 1953, the year of the main events portrayed. Set against the back drop of the Cold War and international events of that same year in places such as Iran, Guatemala, Kenya and the United States, The Terror and The Time shows the election of the first “internal self-government” in the colony under the leadership of Dr. Cheddi Jagan and the People’s Progressive Party (PPP).

Directed and scripted by Rupert Roopnaraine, it’s a fugue-like procession of images (cane fields burnt in protest and sun-and-leaf longingly glimpsed through prison bars), music (insistent drumbeats evoking parallel global turmoil: the Mau-Mau rebels in Kenya crushed and U.S. troops landed in Guatemala) and word (recitations of the confiscated and banned poetry of Martin Carter, one of the jailed leaders).

A few years after the film was made, Roopnaraine was jailed, charged with arson, and accused of attempting to overthrow the government with his colleagues in the Working People’s Alliance, a revolutionary third party. Four years ago, Roopnaraine allied his party with the one Burnham founded to unseat the one Jagan founded, then in power. This year, in a coalition with other opposition parties, that alliance won.

The filmmakers – the Victor Jara Collective – formed in Guyana in 1976; the name was chosen to commemorate the Chilean poet, Victor Jara, who was assassinated in the right wing coup against the Allende government in Chile only three years prior. The Collective consisted of Rupert Roopnaraine (director), Ray Kril and Susumu Tokunow (cinematography & editing), Lewanne Jones (audio, research, editing), Gloria Lowe and Pippin Ross (production associates).